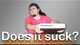 In my second attempt to make a comedy/tech video, I came up with this idea of being the most biased reviewer in the world but presenting myself as not being biased at all.. What a concept!

Okay, it's not that terrible, I'm still kinda proud of the jokes using graphics in this video, I think I did a decent job with them.

Like with the "Totally an Apple Enthusiast", I still wanted my channel to be comedy/tech channel, but focusing more on the comedy side. It was actually after this one that I realised that being intentionally funny would be really hard, that's one of the reasons it took me years to get back on youtube. That and depression and lack of motivation.. but that's another story.

With the Eric Experiment videos, I decided to change my approach, I decided to talk about stuff that I like and make videos about things I enjoy and if I come up with some funny bits to put in great, if I don't, whatever...